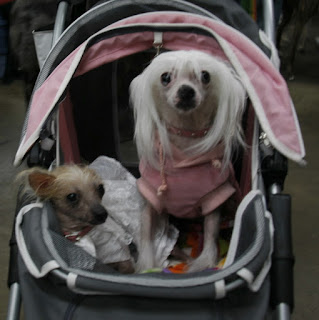 Part of being a dog-friendly town is being able to take your animals with you - instead of leaving them in the car or at home.

I say it in several other spots of this website but I'll say it here again - I don't take Charlie or Buttercup to these places to they can play with other dogs in the middle of the store - they are there as my companions, exactly as if you were taking your 2 year old child shopping with you. The last thing we want to do is cause a fuss, we want to get in and out of there like everyone else! But life is SO MUCH BETTER when your dog is by your side, don't you think? And it makes everyone else's life nicer when they have the opportunity to scratch the head of the friendliest dogs in the world.

Same as squeezing the cheeks of those screaming little 2 year olds! But anyway, I digress! The business owners in the Halifax Regional Municipality are starting to realize how lucrative it is to allow dogs into their stores with their human companions I think! Or maybe we’re becoming better organized – but I’ve found so many places now that you can take your dog shopping with you that I’ve had to reorganize this page so that it’s in categories. Isn’t that super? So it’s broken down into sections – so video stores, building supply stores, etc., are all together – so when you’re making up your shopping list you can choose your stores appropriately! 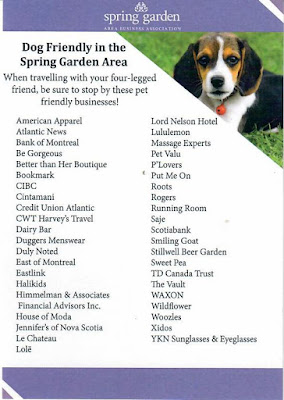 As well - Spring Garden Road has a list of dog friendly stores!

And don’t forget to tell the shop keeper WHY you’re spending your money at their establishment!!! We're becoming so successful at shopping with our dogs and telling each other about it that I've had to break up stores into sections now on this website - I used to have them all on one page - but that has become too unruly - so now you can look below for what kind of stores you need to go to, and then click on that type to see which stores locally are for-sure dog friendly. But it's like I say - you don't know a store is NOT dog friendly until they kick you out! haha! And if you find a store is dog friendly - email me and I'll put it on the site so we can all share the love!!

So here's the list you can go to to find some stores:

NEWS FLASH - and little known thing about Metro Transit - did you know that you CAN actually take your dog on the bus? It's only small dogs (and cats) - small dogs CAN go on Metro Transit - what it says exactly is "Small pets are permitted only if properly restrained in a closed cage. Large dogs and exotic animals are prohibited" - you can find it on the HRM's website at http://www.halifax.ca/transit/documents/metrotransitluggagepolicy.pdf