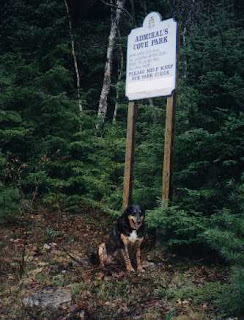 The picture to the left of Charlie was taken on one of our earliest adventures. When I started this website, I looked at the HRM city map and looked at the green spots and then went to them to see if they were good for dogs. Admiral's Cove Park was a huge green space on the map in Bedford, but when I got there I couldn't find a parking lot or entrance or anything.

All I found was this sign and a little path beside it which went in about 50 feet and ended. So Charlie and I tramped around the woods and went down to the harbour and got totally lost in the woodland. It was pouring rain that day and we both got absolutely soaked.

So one of the first lessons I learned when I started doing the field work for this web site that just because the map says it's a green space that doesn't mean it is anything other than an open field next to a school or a bunch of woods. Even when it has the title "Park" next to it. In 2002, Admiral's Cove Park was right next to a humungously built up residential area, so I would expect it disappeared shortly afterward - just like Springvale just disappeared as a place to take your dog - it now has "luxury" homes built on it - a spot that didn't have anything built on it for years because it had toxic chemicals dumped on it! So buyer beware! haha!

This web site mainly exists because I have too much technology at my fingertips.

I like the idea of personal web sites. I had a web site previously called "Charlie and Leonard like to play" that I started in 1998 and it was pictures of them playing at different places around the city. In February of 2002 my husband and I split up and we each kept a dog and a cat - I got Charlie and Liam and the husband got Leonard and Cuddles. So I started the Charlie Loves Halifax web site as a type of therapy - it gave me a good excuse to go to new places and take pictures of Charlie there and put it on the web site. And I was hoping that going to new places would perk Charlie up because he missed Leonard. I really missed her too, but for the first time since I had dogs I could go anywhere I wanted because Charlie is very laid back but Leonard didn't deal well with new situations.

There was no way I could have explored new territory with both dogs. Leonard would have been continually trying to drag me back to the car so she could hide. And I thought it would provide a good service to the city's dog owners because very few resources existed locally at that time, and where they did exist you only found out about them through hear-say. "Charlie loves Halifax" was all about turning my 110 pound lab mix into a pocket dog! There's no reason why a well socialized and well mannered dog can't go everywhere with us as far as I'm concerned - and the law agrees with us - by law the only place they can't go is to places where food is being prepared or served. My theory goes like this:

Halifax isn't any more dog-friendly than any other city but I take my dogs with me everywhere I go because I've found a lot of places that welcome dogs because of my website so I spend my money at those places. Other people hear about those places and start taking their dogs with them - dogs become better socialized and well mannered and people are able to take them more places because of it.

Stores owners see that they can get more business if they allow dogs in, so they start allowing dogs in - so dogs get to go more places and they get better socialized - and so on and so on and then you have a dog friendly city! And everyone has a 110 pound pocket dog! I figure if I pretend like Halifax is a dog-friendly city, eventually it will be! And everyone has a great companion, and we get to hang out with our dogs as much as we want and the dogs get to hang out with their gods - and not just the chihahuas get to go places.

Recently I was at a website called "Dog Scouts of America" where they talked about responsible dog ownership and they had some really good ideas that I totally agree with. In part they say: "Responsible dog ownership is something that needs to be taken seriously in this country. For some reason, America, the land of the free, places more restraints on canines than most European countries. In many "old world" countries, dogs are allowed everywhere in public. People take their pets shopping with them, to church with them, and to the pub with them. What made America take on such a negative view of pet ownership, that it started placing restrictions on where we could go and what we could do with our dogs? Could it be that some pet owners, because of their irresponsibility, have caused American merchants and government officials to take on a "better be safe than sorry," and "don't allow them a chance because of what they might do" kind of an attitude?

That's a shame, because most of the dog owners I associate with are very responsible, and it's too bad that they have to be "limited" or punished for the past transgressions of others. If we want to turn around the attitudes about dogs in this country, we have to try to make all dog owners take responsibility for their pets and become "model citizens." This is part of the goal of Dog Scouts of America. " You can read more about Dog Scouts of America at http://dogscouts.org/base/

I can't control the fact that there are a**holes in the world and some of those a**holes also own dogs. And some dogs are also a**holes! All I can do is to be a good dog owner and treat my dogs a certain way. I may live in my own little bubble - maybe no one else really does want to live in the type of place that I envision, but that doesn't matter, because I pretty much already do live there now - hopefully things will only get better and people will become more enlightened, not more jaded and hateful...

I'd say it'd be about the same for dogs. So you'd get about the same mix. And it would cause about the same chaos. None. And that's my point. Maybe I am living in a dream world... I also DO have a dream for this city - that Halifax - and maybe the whole province of Nova Scotia - become a tourist destination for dog owners. I think it would be absolutely awesome - and it would be especially awesome for the dog owners who live here year round because we'd reap the reward of the benefits that the dog tourists would get when they visit here.

Dog owners are a segment of society that is exploding - and we have got a ton of services and attractions that we could offer a tourist who wanted to bring their dogs along with them if they were coming here on a vacation. To even just dip your toe into the idea is mind blowing. There is SO much money to be made it is unbelievable. I talk about it more on my "blog" in a post called "the politics of dog culture" if you're interested in reading it
Email ThisBlogThis!Share to TwitterShare to FacebookShare to Pinterest