Tips for a benevolent alpha 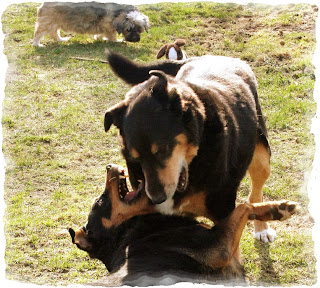 I am very lucky. I was blessed with a well-mannered gentle dog. Charlie listened to me and tried to do what I asked him.

He always got up and moved instead of being walked over. When we were at someone's house he always stayed with me. He only barked when he needed to. He only went up to people who gave him eye contact and smiled at him - otherwise he'd just ignore him.

He was a very smart dog. I do not take complete credit for his wonderful personality and temperament. But I think I did have something to do with it. I call myself a "benevolent alpha" which to me means that i only gave him commands for things I actually needed him to do. I would be driven to distraction when we are at Point Pleasant Park (or anywhere that there are dogs) and I'd see owners constantly hollering at their dogs to come and when the dog doesn't obey they stand in the same spot and just holler louder.

And they do it the whole time. Their dog is sniffing or playing then for no apparent reason (except to hear the sound of their own voices) they are hollering "Come on Rover" or whatever it is they are saying.
There are 2 reasons the dog doesn't come.
1: He has learned that the command is optional, and
2: Imagine if you were your dog and you were doing something that you found very interesting and for no reason you were being asked to stop. Would you? It is my belief that you only should call your dog to you when you need them to come to you.

Commands are not optional. If the dog doesn't come you go to the dog and get them. I took Charlie - and all my dogs - to the park for their enjoyment. If they want to sniff one tree for the whole hour that we're there, that's what I'll let them do. For one hour a day I follow their agenda. 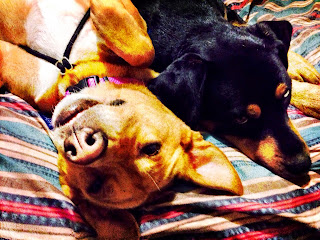 I don't think that's too much to ask because for the other 23 hours they're angels. As a benevolent alpha I tried to keep Charlie's frustration level as low as possible. To me that is what makes a successful and a bad dog. When we are on the sidewalk and there's another dog Charlie used to become really frustrated because he couldn't get to that dog because of the leash. Now once we are within 26 feet of the dog (I use a 26 ft Extenda-leash) I let the leash go and he can go at his own speed to the dog and there are no problems.

I would also distract him until we're within a reasonable distance so that the dog is close enough to approach without going completely ape-shit and appearing like he's going to kill the poor thing. One thing that is very important though when you're talking about leashes is strength.

Charlie was physically stronger than me, so when he was younger and I needed to control him more I used a Halti (or Gentle Leader which is what I used) harness. If we didn't have that we would both be dead right now and I mean that quite literally. I didn't find that slip (choke) collars or body harnesses worked because he was still so strong and just ended up choking himself. When Charlie was an older dog he had calmed down and even when he saw a cat on the other side of the road he could contain himself. But I think if we didn't have the Gentle Leader he would've continued to drag me around where he wanted. He learned with that device that I am the one in charge and even without the device now I am still in charge.

That is extremely important. Another thing that I think is important in the pursuit of a happy/good dog is to never punish but always praise. Whenever Charlie did something that was bad or inappropriate I didn't punish him for it - I just ignored it. So he was never rewarded for bad behaviour (ie: got attention). When he did something good he was treated as if he was better than sliced bread. 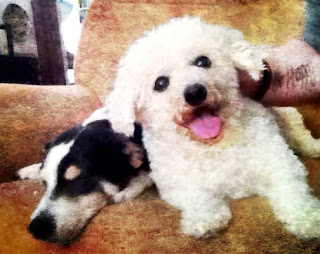 So positive behaviours were the way to get attention. And I think that was crucial. If we walked down the street and he started barking and lunging at a dog across the street I wouldn't stand there and holler at hime (like a lot of people do). I simply kept walking and by using the leash kept him walking too. And when a dog walked by on the other side of the street and Charlie noticed him but didn't go crazy I would tell him what a good dog he was. So that dog became not a source of frustration but an opportunity to get good love from me.

This goes for everything - including house training. If he had an accident inside I wouldn't punish him. I would just clean it up (with soap and water then white vinegar to remove the trace smell). It wasn't his fault that he went inside. It was mine. I wouldn't notice the signals he was giving me and/or I had let him out of my sight for too long.

A puppy can hold his water 1 hour for every month that he is old, so if he's 3 months old he needs to go out every 3 hours. Whether he looks like he wants to go out or not. And you wouldn't let your 2 year old baby have complete run of your hourse, so you shouldn't let your puppy dog either. I believe it's my job as his companion to make his life as pleasurable and happy as possible.

It is what you do for family and friends that you love. I took my relationship with Charlie and my other dogs very seriously. He deserved to be treated as a full member of my family and I attempted to fulfill that.

That's my main reason for having this website. I wanted to be with him as much as possible and take him as many places as I can.

There's no reason why a well-behaved, well-mannered and healthy dog cannot go to most public places.

The time has come to stick our necks out and just show up at places with our family members and expect good service!
Email ThisBlogThis!Share to TwitterShare to FacebookShare to Pinterest

Home
Subscribe to: Posts (Atom)
If you believe in the work that I do here and enjoy the posts on this website it would be awesome if you wanted to donate to support the work I do with all of my websites.
You can send me your donation via Paypal - just click on the Paypal button below and follow the instructions.
Thanks!!