What to do when your dog isn't dog friendly 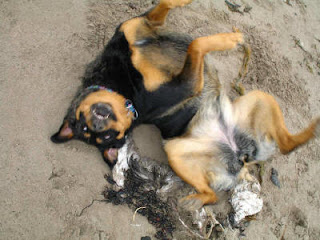 It's a badly kept secret that Charlie was very dog friendly - when I started making this website back in 2002 I only had Charlie and his sister Leonard - but since that time I've taken other dogs into the family who are less than happy when canines tried to come and seemingly take away what they thought might be food products or other tangible things like love from the thing that they treasured most in this world - that being the human that they liked to protect.

They also really seemed to get a kick out of acting like a pack and pouncing on anything that moved. And to tell you the truth - I got a kick out of it too - it's just unfortunate when that thing happened to be another dog or a human! (NOTE HERE - I am actually in control of my crew though and would never have allowed them to do any harm to anything or anyone or to a child ever. I am indeed the leader of this pack - Buttercup would protested this - but I am the leader).

So Charlie was very friendly, but I had a big scary looking dog who was also very friendly - but came to me after having been chained to a dog house for 3 years and never having been exposed to any kind of noise, commotion, motorcycle, bicycle, man with hat, jogger, skateboard, funny looking person, or loud sound - all of which she wanted to chase. And when a scary looking dog chases any of those things - melee tended to ensue.

She also liked to make sure she was the boss of any dog she met and she did this by pinning the dog that has not just perfectly flattened their ears in the way she liked - and you can imagine what the dog's owner thought of that! But if you're reading this page - I'm sure you're feeling my pain right now! She wasn't actually hurting them, she wasn't doing any damage, except to the other dog owners psyche - and to the bad luck of my day.

And to the potential life of Daisy - because in the wrong set of eyes - that's enough to kill a rottweiller. If Buttercup my bichon did that - everybody would laugh and think it's the cutest thing - which she does - she was the most dog aggressive dog in my crew - and everybody we met thought she was just the BEST. Such a CHARACTER. No one sees her running towards their dog at 100 miles an hour initiating the negative contact - they only saw the black and tans following her lead.... huff huff.... okay - back to the point of this page! haha! 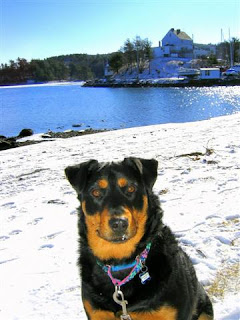 So because of all of the above - I developed a bit of experience with living with dogs who aren't dog friendly and giving them a quality of life that was still very good - because even if a dog isn't dog friendly I believe that they still need to have good off-leash exercise, they still need to get out of your back yard and basement - they still need to get OUT. Even if your dog can never be around another dog ever in it's life doesn't mean it can't be a fabulous lifetime canine companion for YOU. I still went to every place I mention on this site - I just went there at times when other dogs don't go there. Or if I did go there when other dogs are there - I made liberal use of my leash. Although I would never go to the Mainland Commons Offleash Park at a time when other dogs are there - I will only go there at 8pm or later.

I also go to Long Lake - but I go there at night. I have a FABULOUS night light. KNOW where you're walking, of course. Another thing I did was to go to beaches with long view planes - beaches like Conrad's beach in Dartmouth, Rainbow Haven in Dartmouth, Clam Harbour, Martinique Beach - so that you can see people coming from a long way away so you have time to leash your dog up.

And if you don't have a great recall with your dog - GET one! If there's one command that's absolutely necessary with a dog that's not dog friendly is the recall. That was Daisy's one saving grace and the thing that kept her alive - was her recall. I think she always came when I called her because she was so happy someone wanted her to come to them.

When you are walking on-leash in town and you encounter another dog - keep your dog focused on YOU and not the other dog - figure out what is the highest reward thing for your dog and carry it with you at all times. Your dog will seem like the most well trained dog in the world! Distraction is the #1 way to make your dog look good. So instead of trying to kill another dog as they walk by you down the street - keep them distracted with the high reward treat - and bob's your uncle - they've passed and you can go on with your day with the animal you've chosen to spend your life with. Nothing special. And we're all the happier for it because you've just made your dog - dog friendly! haha! Isn't that super!