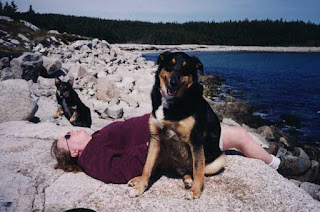 Crystal Crescent beach is one of my favourite places to go with the dogs - we go there to look for buoy booty and climb on the rocks.

You can hike in either direction from the parking lots and there are great paths all the way along right next to the water and/or rock face.

I like to do a thing I call "searching for buoy booty" - I like to look for buoys that have come onto shore in one piece. I was building quite a collection for awhile, but they're now decorating someone else's deck. It is about a 30 minute drive from Halifax if you got the speed limit (80 kms an hour).

You go out the Herring Cove Road and then turn right onto the Old Sambro Road. Follow that road all the way to the end and then just follow the directions to Crystal Crescent Beach. You could go a slightly longer way and take the Purcell's Cove Road and go through several quaint fishing villages as well! Michael Haynes' book "Trails of the Halifax Regional Municipality" has a good section on Crystal Crescent.

If you go right from the parking lots you will eventually come to a nude beach. I'm not sure how far it is because I've never gone that way in the summer time. If you go left from the parking lot you can walk for quite a while - I've never gone until I've reached someone's private homes and I've walked for an hour in one direction, so you can go a long way. The scenery is spectacular.

There is even a lighthouse on the horizon. The rocks are amazing and easy to climb if you're so inclined. The trail is behind the rocks so you can do it easy or you can do it hard by staying on the rocks. On windy days there's a lot of big waves crashing on the rocks so act like it's Peggy's Cove and stay away from the shoreline!! There used to be no facilities at Crystal Crescent but they filmed a movie there a few summers ago and they built an outhouse and a walkway to the beach with the proceeds from it. In the summer time lots of people go there to go to the beach because it is one of those beautiful white beaches with no rocks on the beach part. The water is REALLY cold though, so I won't swim there.

It's not as big a beach as Clam Harbour so it's more difficult to stake out a place and not be harassed by other beach goers because of the dogs. So if I want to hang out on the beach part I go later in the day when there aren't so many people there who can give me grief. Mostly I just go hiking. And a lot of the people hiking have dogs with them, which is good. Charlie loves it there because there's lots of little freshwater pools and a lake right behind the beach about 1/2 hours walk down the shoreline from the parking lot. 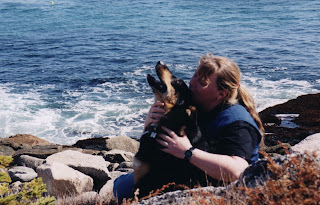 There's lots of things to roll in on the rocks - ie: seaweed and mussels and periwinkles and dead stuff. But it's okay because it all just smells like the ocean! One thing about taking a dog to the beach is the sand factor. They will have sand coming out of their fur for days. And forget about trying to keep it out of your car. And if you're taking your dog just to hang out on the beach, sit in a shady spot or bring a good beach umbrella. I take an umbrella and Charlie will actually lay underneath it. He's such a good dog!

Another thing is the salt water - your dog is going to drink it and he will need to go out and pee more often that night. But it's worth it. There's nothing like watching your dog run at full speed with great abandon down a deserted beach. The look of joy in their eyes is amazing. All Provincial Parks (Crystal Crescent Beach is a provincial park) are on-leash places. You are supposed to have your dog on leash at all times.

So use your discretion. I definitely keep him on leash when he's the only dog on the beach and there's lots of humans. But dogs need to run and if it's not bothering anybody, then do what you want!

Hell, there's naked people just over the hill, so what the heck! I have seen the RCMP there monitoring things, but I would say that if there are no problems, then there is no problem. Take a picnic and have fun!!
Posted by Joan Sinden at 2:25 PM
Email ThisBlogThis!Share to TwitterShare to FacebookShare to Pinterest