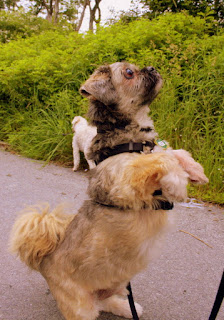 Another great way to spend time with your dog is by walking around the neigbourhood. What I like to do actually is to drive to different neighbourhoods and walk around there, pretending like I actually live there! I like to look at the houses and if it's the right time of day, into the living rooms to see how they have decorated it! I especially like doing it when it is that neighbourhood's garbage night - I love to see what other people throw out!

Some neigbourhoods are better than others. Clayton Park West is a fabulous place to walk. People who live out there are really lucky. The side walks are nice and wide with a wide stretch of grass next to the road so the dogs have plenty of room to move. They also have little paths in between houses in some places and a couple really good little parks that have water features. And they also have the North Common Linear Park Way (I think that's what it's called!?!) which goes in between people's houses for several kilometres.

Another great place is in the north end of Halifax in the neighbourhood where all the old war houses were built. They also have paths in between the back of houses and there's enough of them that you can walk for quite a while. There are also a couple schools with playing fields so you can throw the ball for a while (although playgrounds are "no dogs allowed at any time" areas so beware!)

The deep south end is also an interesting place to walk. You can pretend like you are a rich person for awhile - especially if your dog looks like a pure-breed dog. Quite a few of the streets don't have sidewalks though which perplexes me, maybe rich people don't need them. But the traffic is low enough on most of the streets that it's not an issue.

If you look closely there are a couple spots where you can follow the train tracks behind people's houses and have a nature walk ie: at the very bottom of Oxford Street (Oxford becomes Beaufort so it's actually Beaufort) where you will see a little path going in that goes for quite a ways. As well - the city is working on the walking path thingee - so along Beaufort they've made a huge wide path on one side of the road that is awesome.

It's a nice little trek and you come out on the Saint Mary's University campus. If you have a nice neighbourhood to walk in let me know, and tell me which night is garbage night!!
Posted by Joan Sinden at 2:35 PM
Email ThisBlogThis!Share to TwitterShare to FacebookShare to Pinterest