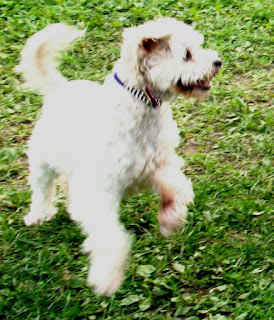 Point Pleasant Park is the oldest official off leash park in the HRM - and some would say the best one. It is what you'd call a "sniff and pass" park - it is a series of wooded trails - and some areas of the park are on-leash, some parts are off leash - and some areas are also no dogs after 10am - so you do have to watch the signs where you go. Along the water down along Shore Road - after 10am - no dogs are allowed at all - so please respect that rule or you may be fined by park staff.

Some pointers about Point Pleasant Park:

Sometimes I find other dog owners are not friendly and don't like their dogs to play with other dogs - which makes me question why they are there in the first place! And there are a lot of non-dog people, joggers, and bicyclists who use the same trails. If someone gets uppity about your dog, simply tell them that after 10am the Shore Road is completely dog free, so if you don't like dogs around you, you can walk down there.

I love having that option to tell people, so I am happy that there are off-limits to dogs parts of the park. A lot of people have no idea how to act around animals so that they don't jump up or give them unwanted attention. It has been my experience that if you ignore the dog (ie: no eye contact) they will completely ignore you. It is when you give them eye contact that they feel free to approach and search you for cookies in any manner they see feasible which may include putting their paws on your legs and/or stomach.

There are maps at several key parts of the trails so it is almost impossible to get lost. During the summer there is live theatre happening every evening. So if you go around 7pm during the summer months, don't let your dogs run in and stop the play - they get very upset about it! Also put bug spray on - the mosquitoes everywhere are wicked, probably due to a lot of open water around the park - and if your dog's a bog-dog, keep towels in the car because it can get messy!

The park is also strictly monitored so follow the leash rules here. There are Park cops driving through all the time and they like nothing better than to give lectures on the laws - they never get out of their vehicles though, so you could probably run away pretty easily! The rules for dogs at Point Pleasant Park are: they have to be on-leash in all parking lots; they have to be on-leash on Cambridge Drive to Olgivie Road.

They are not allowed at all after 10am on Shore Drive (which is the road next to the water from Black Rock beach to the bottom of Cambridge Drive) - they are allowed there before 10am however and it is a hugely popular place before 10am.

There are lots of regulars who go there every morning. 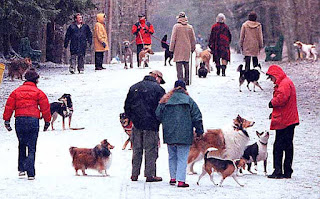 This picture was in the Halifax Chronicle Herald on December 28, 1999. I think you will recognize a few people in it - even though all of the dogs now have gone to heaven and are waiting for us there, but at one point they were stars in their time. The caption below read: "Walk and Wag: Dog owners walk their pets at Point Pleasant Park on Monday. The park has been described as dog heaven." I heartily agree.
Posted by Joan Sinden at 11:45 AM

Newer Post Home
Subscribe to: Post Comments (Atom)
If you believe in the work that I do here and enjoy the posts on this website it would be awesome if you wanted to donate to support the work I do with all of my websites.
You can send me your donation via Paypal - just click on the Paypal button below and follow the instructions.
Thanks!!