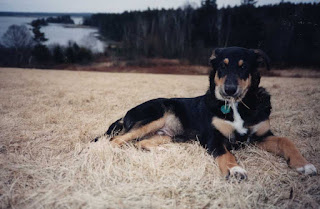 This area is called a couple different things - it is called the "Cole Harbour Heritage Park" and is also called Bisset Road (or maybe it's just me that calls it that!)

It is on Bissett Road in Dartmouth and as you can tell from the above picture, it has some beautiful spots. There is a dirt parking lot on Bissett Road across from the Nova Scotia Rehabilitation Centre (which is now closed and where the Trailer Park Boys television series used to be filmed - I don't know whats going on there now). It is an absolutely huge park that has all different kinds of terrain and even includes a potter's field (old burial grounds see my blog post to read more about that).

It used to be a poor farm about 100 years ago. It has great walking trails that are easy on the feet and a good parking lot. It would be good for any kind of outdoor activity.

I have been there many times and people are usually friendly. I do have to say that I have had the most number of my bad experiences at this park though - and it has always been with other dog people! They have their dog on leash and want my dog to be on leash too - I guess they want to share their pain.

I just nod and keep going. It is my experience that the proportion of dog owners who are assholes are the same as in the general population, so one has to come in to contact with them occasionally - the proportion just seems unusually high at Bissett Park in the last couple times I've been there! Enough of that rant which I cleverly tucked into the middle of this so that no one would notice! (Note added - but I've gotten emails from several people saying that they've never had a bad experience and I should come back and try it again - and just continue to ignore the old bitties!!) On the other hand - there's nothing wrong with going to places and having great on-leash experiences - so you could go to this park and keep your dog on-leash, and obey the rules - because as the saying goes - "it's cool to follow the rules".

It is a great spot to just walk through because the nature is great. There are lots of birds and squirrels and one time Charlie and and his sister Leonard who used to live with us had a great time rolling on a mostly decayed deer carcass. Also see the "Salt Marsh trail" on this site which is literally right next door to this trail. It is also a great place to go, although I wouldn't recommend it as an off-leash place. Although the part of the salt marsh trail that I went to would be fine (I went to a part that hasn't been developed yet because I took a wrong turn and got lost!) It is located in Dartmouth on Bissett Road (duh!!!) and you get to it from Cole Harbour Road.
Posted by Joan Sinden at 12:08 PM
Email ThisBlogThis!Share to TwitterShare to FacebookShare to Pinterest