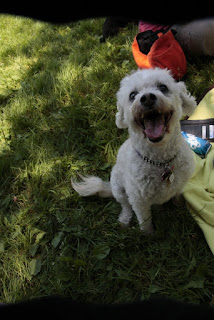 Pet Stores - are a given.
I am very political about this - Pet stores make their living from pet owners - they wouldn't stay in business if it wasn't for us - and yet some of them won't let us bring our canine life companions in with us when we go in their store to spend our hard earned cash in their facility? I don't think so! If I can't take my dog in with me - I am not going to go in there - period! Even if I don't have my dog with me - I'm not going to go!

When you talk to the owners they always have some sob stories "we have expensive items down at floor level that are always getting peed on...our store dog is always off leash running around in the store....dogs are always coming in and peeing on everything.....we have carpet in the store...." blah blah blah - well to me - those are just excuses that they think the public is going to buy because they got into the dog business because they thought they could make money - not because they actually LIKED DOGS. If you have expensive items at floor level - PICK THEM UP!

I have a whole page of tips on this website called "Tips for owners of dog friendly businesses" - business owners can read that page.

I have talked to too many owners of un-dog friendly businesses now that I haven't heard all of the excuses and I can tell you - they're all bullshit. If they want my money - they had better let me bring Buttercup, or Charlie in with me. And that's that. And you should stand up and agree - because that's the only way they're going to listen - with our hard earned dollar.

Don't spend one red cent in any of our local "pet boutiques" until you can bring the animal that you are buying that product for - in with you. Period. There. I've said it. Now - on to the fabulous stores that you CAN bring the best thing in your life in shopping with you! haha!

A great local Pet friendly pet store - and one that also helps out the community is "Pet Stuff on the Go" which is located on Pleasant Street in Dartmouth - it is operated by mental health consumers and will deliver directly to your home top quality pet food - it's store on Pleasant Street also has a groomer as well as toys and pet food - so it's win win all around.

Patti wanted me to make sure I mentioned that there are 3 locations of the locally owned Best Friends Pet Store franchise - Clayton Park in the Sobey's complex, Bedford in Mill Cove Plaza, and her favorite, in the Hubley Centre in Tantallon. - they are a great locally owned pet store that people are very loyal to, and they have great product and are dog friendly - you should definitely consider giving some of your money to these chain of local Pet stores!

Then of course you have Global Pets - they're in Bayer's Lake and Woodlawn Mall in Dartmouth, and now out on the Bedford Commons out in Bedford - they sell tons of healthy type kibble food. And of course all of the stores that I've mentioned do NOT sell any live animals - which is of course requisite for shopping at any type of pet store.

Petcetera out in the megolithic Dartmouth Crossing is a bit iffy - they sell rats and fish too - I have had pet rats so I consider them a live animal - I don't know if I'd recommend them as a place to shop - there's enough other places to go now that you don't really need to shop at those types of places anymore, really - and the food they sell is shit. I had an email from a dog owner and his dogs Taz and Thunder though who still think that Petcetera is still worthwhile because of the fact that they are so dog friendly and the fact that they don't sell dogs or cats and that they have an adoption program with a local rescue organization - and their prices for dog supplies are way cheaper than other places.

Another monolithic pet store that has come to the HRM is Petsmart - they sell a ton of different types of dog food and also some cute dog clothes - I haven't noticed whether or not they sell shock collars (see my rant below) - so I do shop there - they have locations in Bayer's Lake, Bedford Commons and Dartmouth Crossing.

There is also a small petstore that I haven't been to yet in Eastern Passage, but I've heard about so I wanted to mention it here so it gets some exposure - it's called "The Nauti Dog Bakery" and it's an expresso coffee bar for humans and sells handmade dog products and gifts - it's in Fisherman's Cove in Eastern Passage and it sounds pretty neat! They have a facebook page at https://www.facebook.com/Nautidogbakery/

Dog's of Pride is located in Lunenburg County - but they have a busy online business as well for people living here in the HRM - http://www.dogsofpride.com/ - they have a very busy facebook group if you want to connect with them that way, and they're the exclusive Maritime dealership for a lot of super doggy stuff, so you should definitely check them out!

Greenhawk Halifax is on 477 Cobequid Road - it's a horsey type store that also caters to dogs and is dog friendly - it looks super interesting!

Another horsey type store that’s dog friendly is “Tack it Up” which is out in Bayer’s lake on Chain Link Drive – I had an email from Katherine who said that the owners are dog owners and dog lovers – now if only I could get Charlie and the rest of my dogs to not want to chase horses whenever we see them at the beach!!!

Pet Valu is, and has - opened up several locations around the HRM - they have moved here from Ontario and out - and are supposed to be a major competitor for Global. I have several reservations about them because they sell shock collars - if you don't know what they are, they are collars that you put around your dogs neck that emits an electrical shock that some people think "trains" a dog into submission. Some countries in this world have banned them - and a lot of people think they should be banned in Canada too - so until they stop selling them, a lot of people will continue to spend their money politically - and shop at places like Global Pets, Best Friends, Petstuff on Go, Dogs of Pride - and places like that. However - if you want to adopt a KITTEN at a satellite area - Pet Valu is STILL the place to go.
Posted by Joan Sinden at 3:35 PM